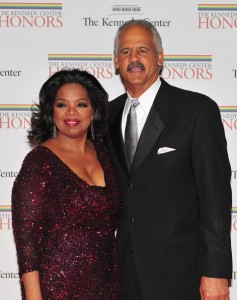 In a recent interview in India at the Jaipur Literature Festival, Oprah Winfrey shared her thoughts on marriage.  While she’s been in partnership with Stedman for 26 years, they’ve never married and here’s why:

I think that had we gotten married we probably would have been divorced by now. And he would agree. I really am my own woman and I don’t really conform very well to other people ideas about who and what I should be and being married calls for some conformity.

Too many people today believe marriage is the cause of divorce and its not.  While I appreciate her honesty and the knowledge she has of herself (I don’t really conform very well to other peoples ideas…) the people that marry and the reasons they marry are the root cause of divorce.  For example, when Heidi Klum met Seal, she talked about seeing the imprint of his “package” and that is what lured her to him.  Looks like she grew tired of the “package” huh?  Beyond celebrities, people in the real world marry because; I’ve been dreaming of this day since I was five, he/she makes me happy, I’m a hopeless romantic, you complete me, and a myriad of other reasons rooted in made for TV romantic comedies.

I tweeted this very early this morning before watching the video below or writing this post: you cannot kick God out of his creation; marriage and expect it to work.  God created marriage and with that he outlined a specific plan and design for marriage.

I’m guessing if you can date/be in partnership with someone for 26 years, you can be married to that person?  The very core of any successful relationship requires compromise and conforming, bending and blending to some degree without changing the essence of who you are.  Watch the video…

In essence, what she’s really saying is; because I’m not married to Stedman, either of us can leave whenever we want too without the legal entanglements that come with divorce.   It all sounds like rubbish to me and I don’t understand it.  Do you?

P.S. I’m discussing this with some colleagues right now and one said, Oprah should not be giving advice on marriage.  How to be a successful billionaire woman…fine…marriage and relationships…no.  My other colleague who’s been married for seven years says, if I didn’t bend, blend, conform and compromise, I would be divorced.  If I showed in marriage wanting to be my own man, I would be divorced.  Bending and conforming are a part of life.

P.P.S. Marriage is the one relationship that brings up all of your stuff and makes you look at yourself in a way that you’ve never looked at yourself.   I don’t think Lady O wants to really look at herself.