He Seemed Desperate
Before the new season of #MarriedAtFirstSight premieres, there’s a matchmaking special that shows the process of how each couple is matched.  As I watched the special, David, who is currently matched with Ashley stood out to me and not for good reasons.  I wouldn’t have chosen him for the show.  He seemed desperate like he wanted to be married too badly and for all the wrong reasons.

Treats Him Like He Has Leprosy
After watching the first three weeks of the current season, it looks like David is desperate because, in the most recent episode, he said he is falling in love with Ashley; a woman who treats him like he has leprosy. How are you possibly falling in love with someone who treats you so poorly? Do you like abuse? I don’t get it! What’s really going on with you David? She cringes and gives you the stink eye when you any attempts at getting close to her.

She Says She Wants To Be Married
While the good old folks on Twitter would like me to give Ashley a pass, I cannot and I will not.  There was no mandatory draft for #MarriedAtFirstSight.  She signed up to do this show willingly because she says she wants to be married.  Married to what, I ask.  She’s more into her dog Belle than she’s into David.  In addition, her level of deep anxiety and fear are very strange.  I’ve never seen anything like it! She seems to be terrified all the time!

Women Don’t Want Nice Guys
As desperate as David came off in the matchmaking special, he does seem to be a very nice guy.  But you know what, one of my boys said a guy can’t just be nice. Women don’t want nice guys.  He’s got to be nice and something else; nice and funny, nice and stylish, nice and financially secure, nice and well connected etc.  Ladies, is that true?

It’s Time To Give Your Type A Rest
Week after week after week, Ashley moans about how she is not attracted to David as if she expected to be matched with David Beckham.  She’s stuck on a physical type and admitted that she focused a lot on physical attraction in previous relationships.  Guess what Ashley, if your type were working, you wouldn’t be on #MarriedAtFirstSight.  It’s time to give your type a rest and give David and your marriage a fighting chance.  Question, can a relationship/marriage move forward without sexual attraction?

Short End Of The Stick
And then there’s Neil and Sam.  Seems like the good guys definitely got the short end of the stick this season.  There’s a notion out there that says women are more prepared and ready for marriage than men, however, this season of #MarriedAtFirstSight proves otherwise.  Sam is so abusive to Neil to the point that it’s unacceptable.  She kicked him out of her place in the latest episode just because he made a joke that hit too close to home for her.  What a selfish brat! Neil should’ve never agreed to move back into her place. They should’ve stayed put where they were and used their deep level of discomfort to motivate them into finding a better place sooner. 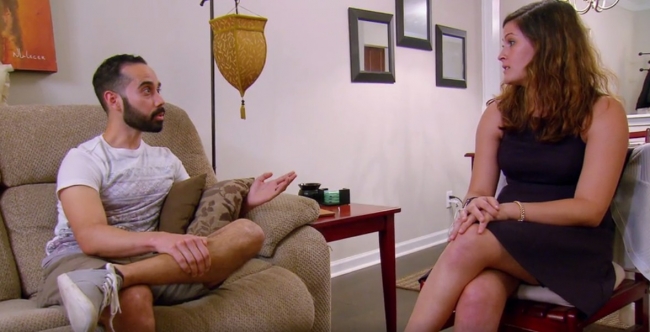 Independent Working Man
Neil can’t win with Sam. She got mad at him for not speaking up about moving into her place temporarily with her roommate. Why on earth did she even think that was a good idea? He could’ve shut it down immediately but he gave it a shot.  Any woman would know, stranger or not, that no man wants to move into YOUR place with you AND a roommate! Neil was an independent working man fully capable of taking great care of himself before he met Sam.

Midst Of The Storm
One of my Twitter peeps thinks Sam needs to be with a more stand up guy.  That wouldn’t work either. Based on what she’s shown me, I’m sure she’d find a way to emasculate him quickly.  The problem is Sam, not Neil or any other guy. Could Neil man up a bit more? Sure he could but he was matched with Sam because she’s man enough for everyone in their marriage.  Two bulldozers sharing the same space would be a lot to deal with 24/7.  Neil is the calm we all need in the midst of the storm.

One And Done
Looks like it will be one and done this season.  Vanessa and Tres seem to be the only couple on track to staying married.  We shall see within the next few weeks.  Listen, if you’re reading this and plan on signing up for season 4 of #MarriedAtFirstSight, here are a few things you need to do and know:

1.You will be matched with a total stranger.  A stranger is someone you have not met before and do not know.

2.  You may not be instantly attracted to this total stranger.  That’s expected.  Give it a chance.  Attraction can grow.

3.  You willingly signed up for the show.  No one put a gun to your head and made you do it, therefore, you need to be all in and give it your 100% best shot.  Dr. Logan Levkoff one of the expert agrees and says, “The only way to do #MarriedAtFirstSight is to be ALL IN. 100%.

5.  Know that all of social media will be watching and commenting on what you show us.  If you can’t take the heat, do not put yourself in the #MarriedAtFirstSight kitchen.  It gets real HOT in there!

6.  Communication is required of you.  You must talk.  You must share. You must be transparent if you want to be known and get to know your spouse.

What say you? What else would you add to the list of things to do and know before signing up for #MarriedAtFirstSight? What are your thoughts on Sam and Ashley? David and Neil? Can a relationship/marriage move forward without sexual attraction?