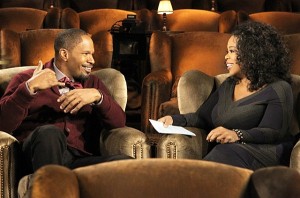 Hilarious!
“Why yo belly so big” was the funniest line from Oprah’s Next Chapter interview tonight with Jamie Foxx.  His face when he said it and the way he said it cracked me up.  Hilarious!

Not One Consonant or Vowel
OK, this post is not about Jamie’s big belly.  Its about his relationship status.   Jamie Foxx, if your eyes ever land on this, I want you to know I sincerely appreciate your honesty.  Right before I watched his interview, my eyes landed on an article about why black women can’t keep a man or something like that written by an unmarried black man.  Not one consonant or vowel in that piece placed any responsibility on the man’s shoulders.

Missed the Boat
I’ve said it once and I’ll say it again; we can write article after article about why black women can’t find a man, get a man or keep a man however, if we never address the role black men play in this equation, we have completely missed the boat.  We can’t date and marry ourselves.

Its Catastrophic!
And that is why I appreciate Jamie’s honesty.  When Oprah asked, “Why have you never married,” he said, you get your heart broken one good time especially for a man and its catastrophic.  I always sort of wanted to be married but when you get that feeling like you’re falling for somebody and it all goes bad…for a man, its like post traumatic stress disorder.  I’d see my friends who were married and then they’re not married and they hate each other and there’s kids involved…I just don’t want that.  She then asked, “Who are five people that you know are happily married” and he said, I know one couple that’s happily married and the others are gnawing their arms off.

Marriage Doesn’t Have a Good Look
Its funny he said that because just the other day while stuck in traffic on the 405, I was listening to talk radio when the host asked, “How many of your friends and family members are single because of your marriage?” OUCH! While its not the best idea to make the decision to marry or not marry based on someone else, marriage doesn’t necessarily have a good look right now with the divorce rate hovering at fifty percent.

I Don’t Want to Be Kept
Instead of writing all these articles aimed at black women, we need more honest men like Jamie.  I’m looking for the article written by a black man that says black women can’t keep a man because I don’t want to be kept.  I act like I really want to commit when the truth is I really don’t want to commit.   A long term, monogamous committed relationship is not for me.  I’m a short term kind of guy.  I’m perfectly fine with having a kid here and there but marriage; no thanks.  I’m the reason why black women can’t keep a man.