Marry The Wrong Person
“Be sincere, are you scared of getting married?” I saw that question asked on Twitter the other day.  The most popular answer was, “I’m scared to marry the wrong person.” One person said, “Afraid of Marriage no! I’m afraid of marrying the wrong person…Afraid of living in hell and call it endurance.” 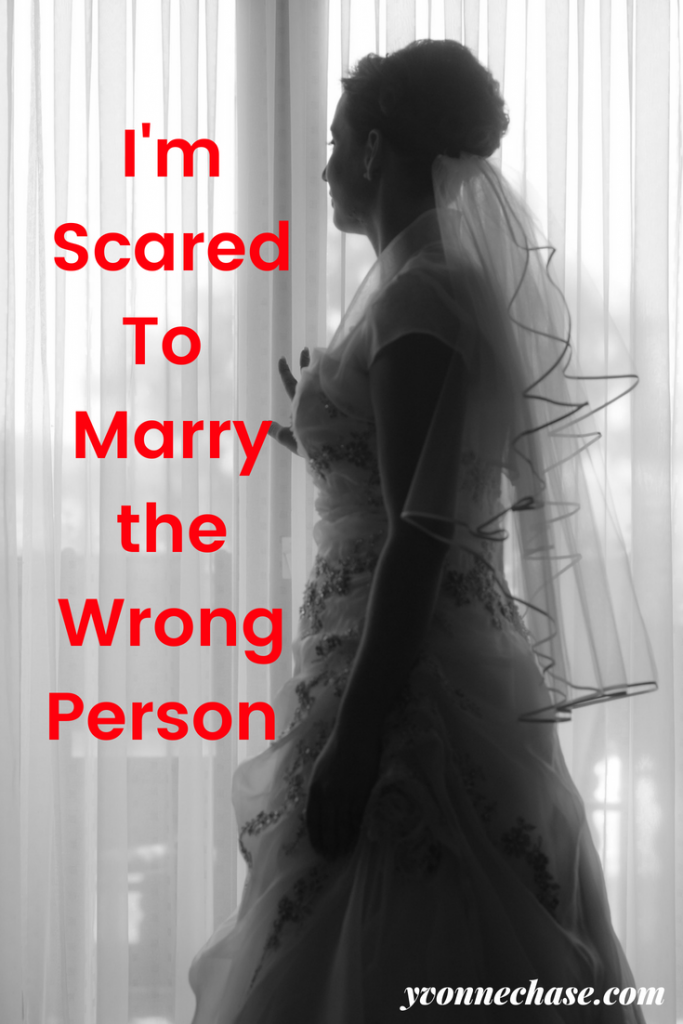 It’s Not A Contract, It’s A Covenant
My reply to that is, there is no such thing as marrying the wrong person. You knew exactly who they were before you walked down the aisle yet you did it anyway. People show us who they are and what they’re capable of every day all day. By what they do/don’t do. Say/don’t say. Agree? Disagree? One married lady agreed with me while another gentleman said:

When your partner in marriage or in business even change from what they used to be to something you never thought they would are they still the same? That’s when you start thinking you’ve enter into a contract with the wrong person.

Marriage Is Not A Business
If my partner in business changes then yes, I might think I got in business with the wrong person, however, marriage is not a business. Contrary to popular belief, it’s not a contract, it’s a covenant. He continued with:

People change throughout the course of life, some positively and others negatively. If I marry you, you don’t expect me to turn worse than you met me peradventure I do, wouldn’t you say you never knew me hence you have married wrongly?

Changed For The Worse
This is marriage. As he said, people change. No one stays the same. Some change for the better while others change for the absolute worse. If I was married and God forbid my husband changed into a slob who ate anything, gained over two hundred pounds and didn’t want to workout, we would have a major problem and I mean major!

For Better Or Worse
Health and wellness are the foundation of my life, yet I don’t get to say I married the wrong person and divorce him because he changed for the worse. I did say vows that include the message of for better or worse even if I didn’t say those actual words.

This Might Go South
In an interview with Christianity Today, Matt Chandler lead pastor of The Village Church in Dallas does a great job of explaining the difference between a covenant and contract. He says:

Our lives are driven by the contractual and what I mean by that is most of our cell phones, our mortgages, our leases, our car notes, all of those are forms of contracts; we are saying that I am going to give these things, but if I give these things, you must give these things. So, I will give you this amount of money, but if I give you this amount of money, you will give me in return this much data or this car or this house or whatever it actually is. Covenant is the opposite of that. If you think about that moment in a wedding ceremony where the vows are exchanged–that’s covenant. Covenant language is “for better or for worse.” We are acknowledging that this might go south.

Think about how crazy that is that on our wedding day we are acknowledging a relationship that could go bad, but my vow before you, the covenant I am making before you, before our friends and family, and before God, is that I’m not going anywhere. Then it gets even more detailed than that in most vows. Consider the words, “In sickness and in health.” If we are healthy and we get to travel the world, we get to laugh and there is a lot of energy and passion and all of that, then I’m in but it’s also “If you get sick and I’ve got to take care of you for the next thirty years, like on the way back from the honeymoon, we get in an accident, you’re in a wheelchair and in a diaper for the rest of your life, I’m not going anywhere.”

Don’t Make Excuses
So what’s the takeaway for singles? Keep your eyes wide open while dating and pay attention to what you see, what you don’t see, what you hear and what you don’t hear. Watch how he responds to and reacts to the circumstances of life and don’t make excuses for any of it. What you see is what it is.

Tuck Tail And Run
I remember dating a guy who idealized and romanticized marriage. The way he talked about it scared me because he lived in fantasy island where everything is perfect; no arguments, we always get along, life is always good, I always look good and we always feel great. Many people do this and then when life gets hard they want to tuck tail and run. No thanks!

Messy Divorce
Over the weekend, I called an old friend to catch up and that is when I learned of his divorce after five years of marriage. Apparently, his wife changed her mind about marriage once she had their daughter and now they’re in the midst of a messy divorce. He didn’t marry the wrong person, he married for all the wrong reasons; it’s the next logical step, my mother’s been waiting a long time, we’ve already been together two years and she’s looking at me sideways etc. I’ve seen that to be the case for many who end up in his shoes.

Wrong Name
In closing, I leave you with a joke I heard from a pastor about marrying the wrong person. He says, “The only way you married the wrong person is if the wrong name is on the marriage certificate.”

What say you? Is there such a thing as marrying the wrong person?